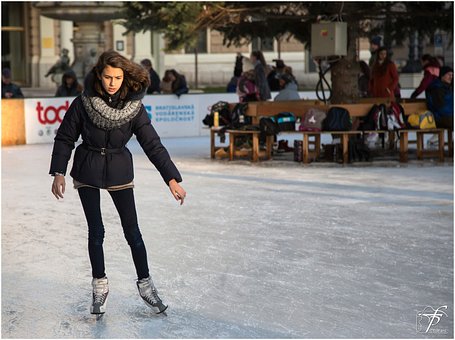 While I have been skating off and on for over 40 years, competed in a lot of events and am currently a mentor for adult skaters, I remember the very first time I stepped onto the ice. I was only nine years old and was so eager to go through the ice for the first time. Obviously, back then I was not doing it to the physical and psychological benefits of the sport. I didn’t understand any of that stuff – I just wanted to glide around and have a terrific time, the way all those figure skaters seemed to have fun on TV. Little did I know that if I took those first wobbly steps, I was beginning a lifetime love affair with the sport of ice skating!

On that first day, I had no clue what to expect. I had roller skated a lot around my area, but had a sense that ice skating would be wholly different. As there are so many unknowns when you pick up a new sport or hobby, I want to share with you my initial experiences back then, and just how much things have changed today for beginners. What’s more, I’d like to share with you what, as a new skater, you can expect when you venture on the ice for your first time.

I still remember that day, when my mother took me to the ice rink one summer day. We drove up to this enormous old building with a sign that read,”Ballard Ice Arena” on it, in large blue letters. The ice rink was located in Seattle, Washington, in an older part of town, so the building had that old classic look you would expect from Rocky films. As we opened the door, I remember looking into a gloomy reception and being unimpressed. It looked so much older on the inside of the building than it was on the outside.

I approached the skate counter with my mom by my side to receive my first pair of rental skates, and almost started giggling when I was handed these gloomy and quite unattractive skates. They were nothing like the gorgeous and glamorous white skates that I imagined. They looked as though they had been through a warwith many gigantic feet!

As I sat down and started lacing up my skating boots, they felt like they were two foreign objects attached to my feet rather than like a comfortable pair of shoes. Then, when I awakened for the very first time I remember thinking,”How on earth do people walk in these things, let alone skate in them?!”

Slowly, and ever so cautiously, I proceeded to wobble down the hallway to the ice with my ankles trying to balance over the very thin blade, trying not to look like the newcomer that I had been. I recall how musty the air smelled too, as I advanced into the ice, but nevertheless it had a clean and sharp quality to it, because of the cold temperature. It’s still a smell I love, even today, because of all of the beautiful memories I associate with it.

As I stepped onto the ice… I immediately grabbed the railing to hang on for dear life! Yes, I knew ice was slippery but, wow, it was really slippery! I just stood there for a minute or so to get the feel of things and see how to balance on the ice surface.

As I started to get a better sense for the blades, I gradually began shuffling my feet forward, in a walking-like movement. I was still hanging on to the railing, but as I moved along, I realized that skating forward was very much like going forward on roller skates. So, I started to push off with one foot a bit as I skated.

While balancing on skates was initially hard, what was a surprise for me is how simple it was to maneuver. I could turn in various directions easily and the gliding felt nearly effortless.

But just like the pavement outside, the ice wasn’t completely flat. Since the rink was old and there was a little dripping coming from the ceiling, the moisture froze, and eventually accumulated into bumps on particular parts of the ice, especially around the edge. I remember going over the bumps and it looked a bit like the moguls on skis-something to be avoided at all costs! Hey, I just learned to balance myself; anything more than this was too much!

After a while, however, I got used to the feeling of the ice, and it seemed to get easier the more I relaxed. While falling was still a distinct possibility, I seemed to be able to balance fairly well. So I continued skating for about 45 minutes or so before I had to sit down for a break near my mom. She asked how I liked it and I told her,”I really like it!” My mother was really happy for me, because she found a new action for her daughter to keep her out of trouble for the summer!

While I rested on the sidelines, I saw marginally older skaters perform all sorts of cool spins and spins in the middle of the rink. They were amazing! I laughed at myself as I just struggled to stand and skate forward in those contraptions known as”ice skates,” and here these children were practically dancing on the ice! I recall thinking to myself about how much I would like to learn how to do that!

Well, that first experience may have been a long time ago, but I can still relate to new skaters and the challenges of starting in a new sport. Of course, it was different for me as a kid than it is for my adult students. But I need to say that after looking back, I wouldn’t have changed something. Skating has been a big part of my life and a huge passion. However, a lot has changed in skating and like all sports it has evolved-thank goodness!

One big change is that ice rinks nowadays don’t tend to be old and dingy, but are typically either stand alone buildings, or are part of a sports complex, or are smaller places in shopping malls. They are often maintained well and are beautiful. Back then, it was a different culture. Rinks were often family owned and there was a certain amount of prestige associated with learning to skate at a dingy place and ending up in some big, glamorous contest. It was largely about competition, and amenities beyond the principles were believed to make you soft. Hey, if you couldn’t skate in some run-down construction with just the bare essentials, how can you stand the pressure of a huge audience in a competition?

The ice was also distinct. These days, many rinks have more than 1 sheet of ice and are open all year! There are some rinks which are outside, like one location in Vail, Colorado. I skated on an outdoor rink in Canada at a park surrounded by a shopping area that was quite lovely, and had a friend who skated in a rink in New York that she said is in a building high over the city! That is a far cry from the rinks 40 decades back.

Nowadays, the ice is frequently equally as beautiful as the rinks. It is often cleaned each one and a half to two hours in many rinks today so there should be no bumps on the ice and the temperature is maintained so there are no drips from the ceiling creating the obstacle course that I experienced at the old Ballard Ice Rink. And surprisingly, the temperatures in most rinks are fairly warm.

The one thing though that’s still questionable is the skating gear, specifically the rental ice skates.

Some rinks have great rental skates and keep them well, while others… well… not so much! As a coach, this bothers me because plenty of people get frustrated if the equipment is worn down, because it causes pain for the new skater and they don’t stick long enough with the game to give it a chance. Often skaters will quit, thinking that it’s their ankles which are the issue, rather than the poor equipment that’s not supporting their foot correctly. (A little trick to help with this is to bring to ACE bandages to wrap the ankle for support before placing on the skate for extra support.)

A whole lot of rinks even have games and amenities in the lobbies like snack bars and skating stores. They are quite pleasant today and do a lot more to make the beginner feel welcomed and appreciated.

Ice skating is a wonderful sport and holds something for everybody and people of all ages. I did the majority of my skating as an adult and it kept me fit and in excellent shape for years. It is great exercise! But, it’s also a sport that builds character, teaches grace and makes you strong. And, it’s so much fun! I invite people of all ages to give this sport a try and see the difference it makes in your life; emotionally and physically. Dont let Rat droppings ruin your skiing plans.